It’s been a while since I talked about JKT48 in my blog. In these last monts I’ve been so busy of my job that I only have few times to make some updates. I couldn’t even make regular visit on GhaiNya thread anymore! On January, my phone had been taken by supervisor because in my workplace mobile phone is restricted. With my 8 hours work and shift changing every week, plus not having my phone with me, internet is unreachable. I was glad last week I had my phone back, it’s a big relief to access internet again after a month of no access. Especially sincd I’ve been missing a lot of updates about JKT48. The first thing that appeared in my Timeline was about Cigull’s graduation, a shocking news which made me a bit angry. I’m certain I also missed members’ Q&A and it’s too late to track their late tweets. Sucks, eh?

Well, at least I know Ghaida hasn’t graduated yet. My workmate who happened to be a JKT48 fan told me that She was going to graduate soon. I didn’t really take it seriously, but an anxious feeling was still there considering how she reacted when Nyash graduated. Thank God she’s still in JKT48, and the current news said she’s one of [Flying Get] senbatsu, together with Viyona. Congratulations for both of my oshis! <3<3

New pics of Ghashapon or Yona? Sorryy… I skip for this post. 😛 But if anyone of you have pics of them, please share to me. 😀

I was kind of late to write this in blog, but as my respect for Nyash, who is a bestfriend of Ghashapon, I think I shouldn’t have ignored and let it aside. Especially, there’s two more who decided to graduate after Nyash and Panda, makes me feel really dreaded that by the end of year we have to let some members go and drop their membership status.

Though the rumor about member graduation has been spread since Calendar Senbatsu voting, I never really thought that it’d be happen. I’m already used to hearing their names called and seeing their faces, and knowing that JKT48 members will never last long here is sad. What will happen if Ghashapon or Pipi graduates someday? I’d probably cry my eyes out and make a whole blog filled with her as my tribute, or create a song. But.. I can’t write a song, so that option is impossible. Haha..

“Nyash has a lot of abilities in art, but never shows them and Nyash is truly an idol, modest and patient idol. Because even before joining JKT48, Nyash has already been an idol, I hope Nyash out there can show something that people have never been seen before… Keep spirit Nyashuuuuu!!!

Nyashu is wonderful, can balance between college and JKT48, though the major that has been taken is hard (architecture), don’t forget to make me a house later, okay? Though we can’t reach our dream together, I’m sure one day we will be together again, hehehe. Good luck also with your Japanese language learning! Next time we will visit together in Japan and Korea. *eh?”

All I could say is thank you for all your had work in JKT48. You all; Stella, Nyash, Panda, Dhifa and Delli, have done and sacrifized a lot to stay in JKT48, and it will always be remembered by us fans. Hope after the graduation, you can pursue your future plan harder to reach every dream you have. See you next time. :’)

Last Sunday, there’s a Handshake Festival held by JOT and the pictures showed looked so exciting and full of crowd. Nyash was very beautiful with her pink dress and Ghashapon also seemed enjoying her time in all event sessions.

I really wanted to buy the product that Ghashapon sold! ><

Melo commented them as ‘Mr and Mrs. Cosplayer’. And to put them together, they looked like Sun and Moon Princess!! 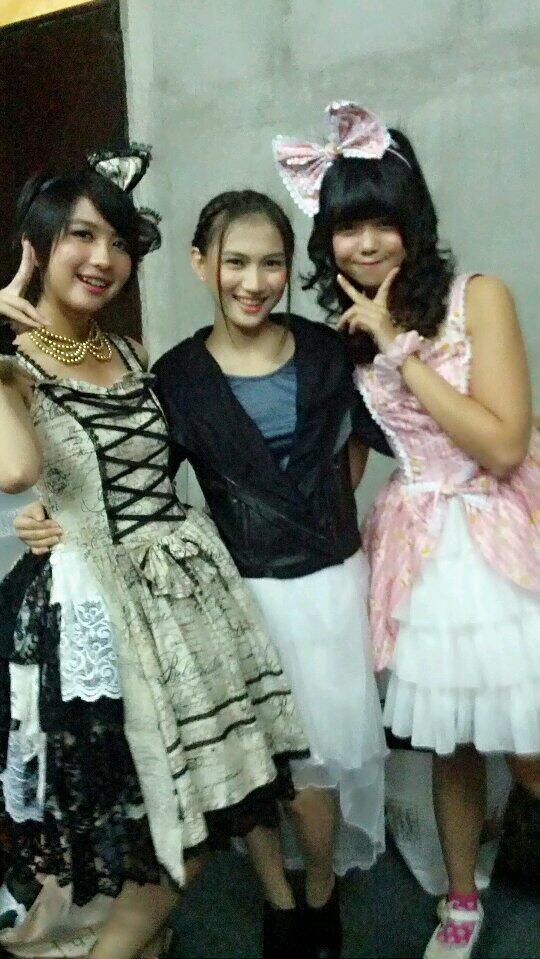 There was also a mini concert and solo performance by Beby, who wore army outfit in the event. It suited her so well! She performed [UZA] dance, which is my favorite AKB48 song. Good job Beby! 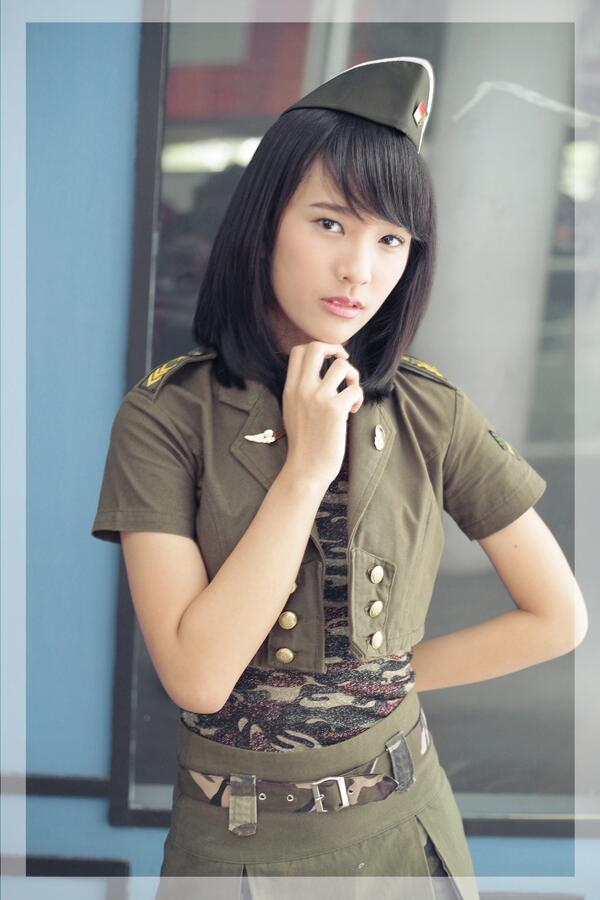 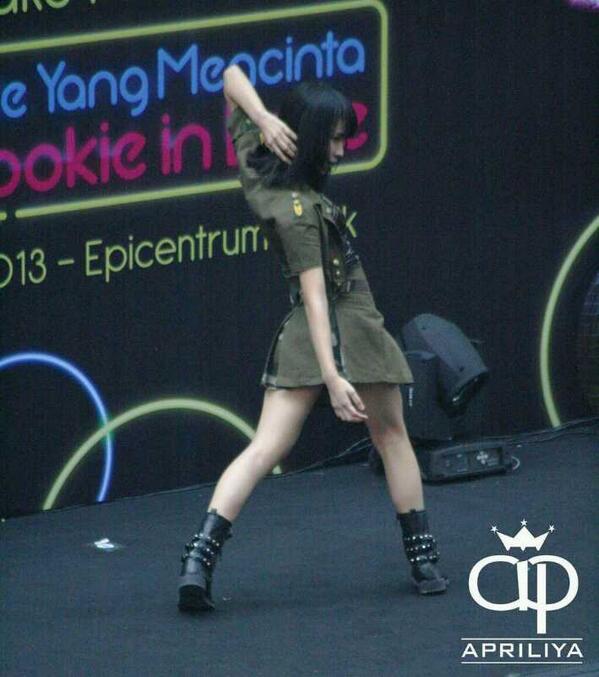 And when the Senbatsu for JKT48 2014 Calendar was announced, I couldn't help to cry a bit after noticing that there's no Ghashapon's name in Senbatsu list. Though Yona made it into Senbatsu, but it didn't really excited me so much because Ghashapon couldn't make it. I wrote on twitter, “I don’t know why, but I’m crying a bit after realising that Ghashapon can’t make it into Senbatsu. To think that last year, I wasn’t even a fan of JKT48 from the beginning. Now, I found myself shedding tears.” Perhaps it’s because calendar is something I could still effort to buy, and I really wanted to see my oshi smiling picture for a year. Especially, in preeleminary Ghashapon had made to the seventh place that gave me confidence about final result. But since none of us could really predict what would happen in the final, I guess I should have prepared myself to face the worst, which turned out failed, and I cried instead. Honestly, I felt childish at the moment… 😆

For Pipi, congrats for your success as one of the senbatsu for JKT48 2014 Calendar. For Ghashapon and Nyash, I will still wish for your luck in the next year. Keep smiling and full in spirit!

Here is Ghashapon’s story about the Handshake festival :

“Somehow there’re many who HS with me though, but thanks for handshaking with me. X) hehe. Since yesterday I wore lolita outfit, all people looked surprised, hehehe XP. Then there’s one who trembled, cold-sweating, and the speaking became stuttered. Then there’s children too, and pretty girls :*, mostly it was really exciting to be able to chat with you all. XDb There’re also many fans from outiside town XDb. There’re also from overseas hehe or maybe from another world too. *eh

Yesterday many people adviced me not to graduate yet, “still want to see you,” they said. Hmm… Touched… I’ll fight and keep in spirit XD. Just let the past event goes away and becomes a lesson, and keep strong to face every obstacle that comes, ehehehe.

Oh, yeah, since last year a lot of Japanese celebs/bands have been coming to Indonesia, so happy, in the past it used to be difficult. So it means that the friendship bridge between Indonesia-Japan becomes closer, wahh.. And the lolita outfit I wore yesterday was made by my friend, Coruscate XD. Keep making outfits to Europe! XDb hehe.

I’ll make another surprise in next Handshake event, for sure XDb. Just wait for the next surprise, okay? Hehe XD Oh, well, I want to watch KR Gaim first then~ whehehehe.”

A fan asked about her blonde wig, saying that few months ago she had tweeted about wearing this outfit. But will it suit with blonde wig? Since I’m not really into blonde, I can’t imagine Ghashapon with blonde hair. 😆 But I’m really looking forward to see the next surprise from her. So, Ghashapon, please keep staying in JKT48 as long as you can! *deep bows*

Side note : I googled up a bit and found an online shop in Facebook named Coruscate UniqueShop. Perhaps it was the said friend that made Ghashapon’s outfit? The profile photo looks kinda convincing, though..

Guess what I have found (or rather, given from)!!!

That was the second outfit Ghashapon wore in HS. Though the angle prevented me to see the detail of her outfit, it’s enough to fill my curiousity. Thanks for someone on JKT48Stuff who replied my comment with this picture link attached. 😀

Hi guys! I’ve been off for about two weeks. These days have been so busy to me, since now I’m having full time work. I have to turn off my phone during my work time and PC is also out of my reach. I don’t even have any time to tweet or post something on social media. My free time is pretty much filled with rest and rest. 😆

So I’m reviewing a news I got from Joe-san about GhaiNya thread. In last post I’ve shared a story about a fan doing Handshake with Ghashapon, and I used “Ghashapon” nickname for Ghaida. Few days later, Joe-san told me that fans in that thread really love that nickname! I was really shocked, as well as happy to know about it. I didn’t expect Japanese fans would love the nickname. But actually I’ve always been curious what kind of name that Japanese fans would love to use to call Ghaida. If it happened to be “Ghashapon”, then it’d be great! I think that nick really suits her. ^^

Oh, I recalled when a fanbase account for Ghashapon opened some small question and answer session. I asked, “Is there any special name used by Japanese fans for Ghaida?” The admin only answered, “Nothing particular, but usually they call Ghaida as Kamen Ghaida.” Somehow I found that nickname was too plain, despite the fact that Ghaida is a fan of Tokukatsu series, especially Kamer Rider. She even calls her fans as “Kamen Ghaida”. I really want her to have a nickname that is really specific, and when I got this nick on some “Ghaida Fact” pages (you can find random pages on Google contain real facts about Ghaida), I decided to use it as my “special” nickname for Ghaida. Maybe because Ghashapon has a lot of nicks like Ghainyan, Ghashapon, Mbuls (similar to “Fatty”), or any other names, her fans don’t really think too much of using particular nickname for Ghashapon. I’m so happy that now Japanese fans already have special name for Ghaida. Isn’t Ghashapon such a cute nickname for our girl? 😀

By the way, The Calendar Senbatsu voting has been closed yesterday. Ghashapon was in seventh place for temporary voting result, but what about the final? She said that she wanted to be with Nyash as Calendar Senbatsu, wonder if Nyash fans already gave many votes to fulfil Ghashapon’s wish?

Hey, I also wonder, she should be having many poses like this one, right? 😛 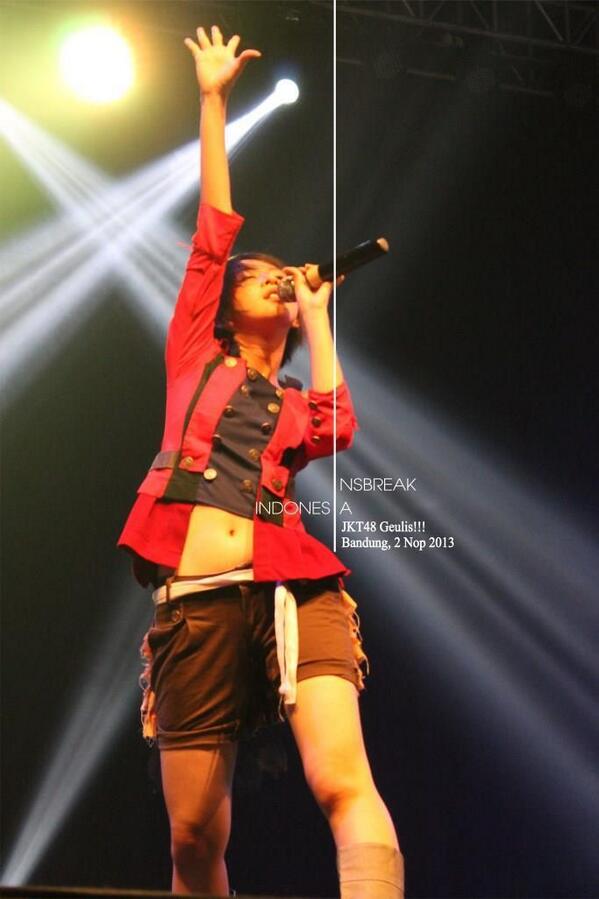 Before I forget, here is a side note; A comment from previous post saying that I should write more about GhaiNya Thread, because fans have always been curious of what Japanese fans would say about JKT48. We aren’t that far in interaction with foreign fans, but not many Japanese fans can speak English and of course there are only few of Indo fans who can speak Japanese, sometimes it makes us difficult to communicate with them. I’ve meet some Japanese fans who also learn Indo, though they don’t have to do that as long as they can speak English. Take an example of Nozawana-chan, who couldn’t speak Indo at the beginning but could still communicate with members through English. As long as you can speak English, it’s not a problem. Or maybe Indo is easier than English? I’m slightly curious of that. 😀

Also, if you have read my Q&A compilation page on Stuff, I will make the second session in the end of this month. Actually I was going to finish them by last month, but due to work and other things (forgetting that I have tasks, limited amount of free time, no PC available) I couldn’t finish at all. So, cross your finger andw wish my luck!