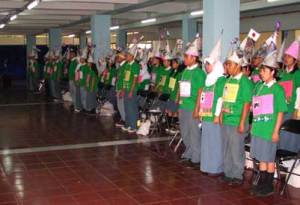 Actually I had once made a random status about Indonesian student orientation day, which we’re fully known of. Hazing is a thing that mostly recognized in this event, although I personally believe that they are more into bullying than to be called as hazing. Then again, those schools aren’t military, so why hazing is legalized in school/college orientation day?

If you try searching on Wikipedia, it’s clearly written that orientation day in other states are different than in Indonesia. Some are filled with fun stuffs, like club performances and activities, parties, though the legal drinking part is unrecommended. No riddiculous clothes and atributes are required, no senior wearing almamater jacket in cocky manner to give humiliating order that has no meaning with education matter, and other things usually related to so called orientation day. I shudder to think if this still continue in the future. What an extremely funny way to teach students discipline and mental strenght!!

I obviously don’t see any good purpose in it. I can’t find it fun when freshmen talking each other about how tiring they are, about how demanding and harsh the seniors are, or how humiliating the orders are. What’s the fun of it? Next thing they mostly will plan to join student council and seek revenge by doing same to juniors in orientation day. So, where is this so called education? Where is it? If some people still insist on keeping this action as long term school custom, then I’ll ask it; what kind of custom that gives children some traumatic experience and makes them seeking potential revenge in future?

In surmission, orientation day in Indonesia should have been fun if only school or college KNOW how to make it fun properly. Make juniors tired, but they have awesome experiences to remember. Senior hazing that is rarely monitored by teachers and school body, only gives bad school memory for students. And we absolutely WANT our children to have good memories in their school days, even from the first day.